Finally I have finished the cover for Mr S' food diary, so we can start writing everything down together, which is the only way he is going to be able to do it and helps me take an interest again. I already had the little notebook for him (moleskine) but he wanted a cool cover, must have cool cover, and the manly marbled thai paper covering was relatively easy, but the assemblage decoration to indicate which is the front of course took many times longer. There was a curled shaving of aluminum, which I lost and had to find another, and then there was some matboard cut into a tiny beveled piece on the matboard cutter which is hard on my fingers, and then there was finding other bits that worked and deciding it was too much and then he said no it was perfect and then there was gluing down with three dimensional stuff. Collage (as you know bob) can take up all time available. And then I remembered I hadn't put in a page marker so I tied in a piece of stretchy gold cord.

But that was yesterday. Today I walked the usual couple hours, in spite of dropping temperatures and rising wind, and then forty-five minutes or so of yoga, and then I had a headache and chill and really didn't feel like much except having a lie down. So I did. And then instead of me making dinner, Mr S went and got us videos and fast food. The usual Condition (have I told you about my Condition?) does not seem to be afflicting me, a subtle shift in which parts are hurting and exactly how. So perhaps I am not well. 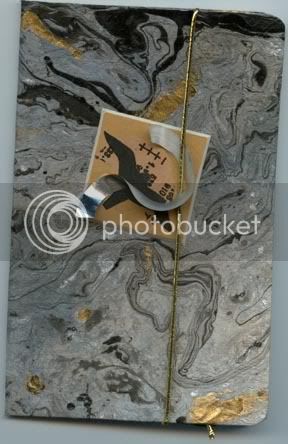